A sojourn to the seaside

Provincial Grand Chapter is always a wonderful event, and this year was no exception. Despite the inclement weather at the start of the day, it certainly didn’t dampen the spirits. 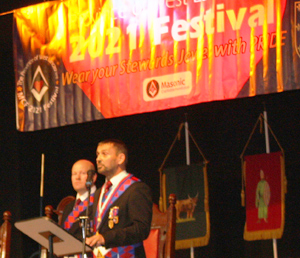 DC David Thomas (right) issues instructions to celebrants and companions prior to the meeting with Malcolm Bell looking on.

Close on 600 came from all over the Province to converge on this lovely seaside location of Southport. Following on from last year, those arriving had the opportunity to avail themselves of free PSA testing, courtesy of the West Lancashire Freemasons’ Charity.

In total, 244 gentlemen were tested, the results giving rise to peace of mind or the possibility of early warning and lifesaving treatment.

The meeting commenced with the usual dramatic procession orchestrated with military precision by David Thomas and his team. This year was slightly different, with a special procession of newly exalted companions, who were greeted with lively acclamation.

Once Provincial Grand Chapter was opened by the three principals; Tony Harrison, Chris Butterfield and stand-in Stanley Oldfield, all the officers, distinguished guests and companions were welcomed. Stanley was occupying the chair because Ian Higham, who was retiring, was unable to attend. Stanley was delighted to move aside after Tony had invested the new third principal, the Rev Cannon Godfrey Ian Hirst.

Enthusiastic applause from a packed chapter room as the newly exalted companions enter. 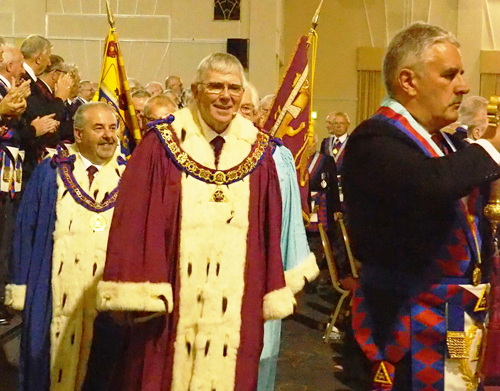 The three principals processing out, led by Andy Barton.

Godfrey has vast experience in the Church of England as a senior Canon, together with an endearing personality, which has made a significant impact in the craft. He is renowned for his delivery of prayers and innovative graces in his captivating melodious tones, and the wonderful orations at the many centenaries and special events. The good news for Tony was that his cabinet, led by Paul Renton, and all his assistants, were willing to carry on in office and he had the pleasure of reappointing them.

It was an interesting initiative that brought recently exalted Mark Humphrey to the stage to speak of his impressions of the Royal Arch from the ‘new boy’ perspective and to share some nuggets from the Solomon website.

Tony followed with his address, which covered several topics, among which were PSA testing, the MCF Festival, ceremonies and membership. For a full transcript of his address, click here.

The closing of the convocation, and the procession out was an example of that pomp and ceremony that we in West Lancashire are famed for.

The atmosphere in the banquet that followed was electric, and the formalities flowed without a hitch. Mike Threlfall proposed a toast of congratulations to all those who had received appointments and promotions, and Tim Burgess, the incoming Provincial Grand Scribe Nehemiah responded. 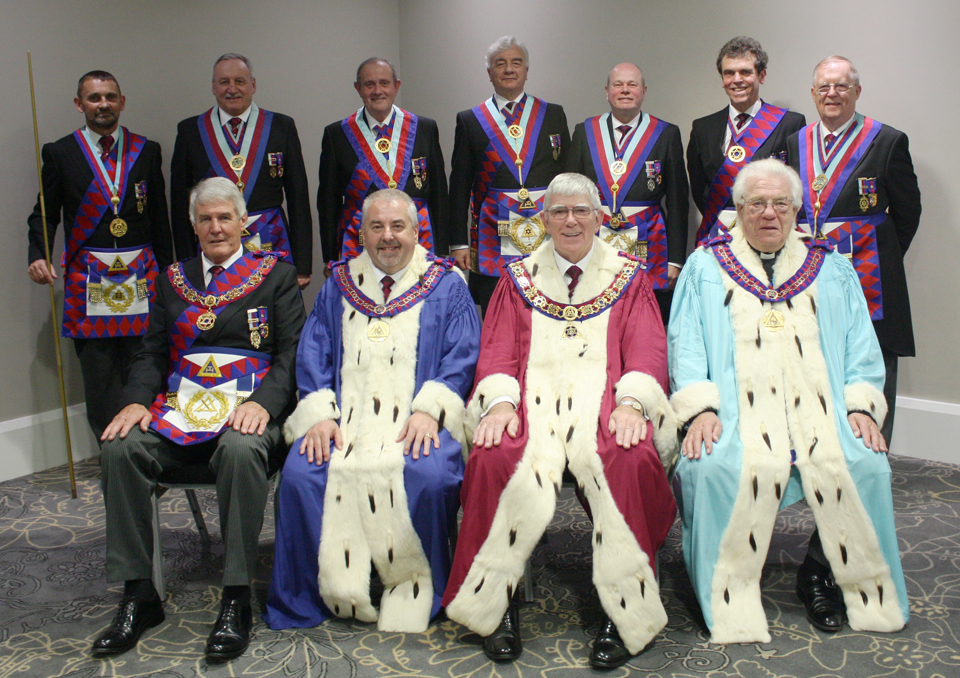 Tony Harrison thanked everyone for supporting his chapter and spoke with warmth and humour to the appreciation of the assembled diners. He can reflect on another successful sojourn to the seaside and look forward to enjoying his Province into the next decade.

Diners before the banquet begins.