Fate is said to be the major player in all things that ensue: The founding and hence survival of Old Huttonian Lodge No 7614 has to be put down to fate, or was it scheming intent 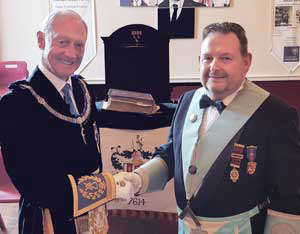 In 1517 Henry VIII was still a popular young king professing utter devotion to his first wife and to the Church of Rome. In that year William Walton, who had already served for many years as priest of Longton Chapel, made a grant of his own family lands and property to provide a regular income for himself and all future priests of the chapel for ever.

As a part of his duties, the priest was expected to conduct a school for the village children and, because he was also required to say masses for the souls of William and his family, the foundation was designated as a chantry. It was not however, the best of times for the founding of a chantry because less than 30 years later when William Walton had been dead for a number of years, Henry VIII ordered the dissolution of all chantries and the confiscation of their property. By chance the man appointed to supervise the dissolution of the Lancashire chantries was Sir Henry Farmington, a former benefactor of Longton Chapel, and who, realising that his own former property would be liable to confiscation reported that he could find no chantries in that part of the county.

Forewarned, Ralph Garstang, the new priest at Longton, had arranged for all the lands and property to be surreptitiously returned to the benefactors’ families, and in 1552 William’s nephew, Christopher Walton of Little Hoole, used a part of the original endowment to found a grammar school which was to be kept in Longton Chapel, with the same Ralph Garstang as the schoolmaster. Amazingly, they got away with it and so, some 407 years later Old Huttonian Lodge was consecrated on 12 January 1959.

This aside and 60 years on from the consecration, the latest installation meeting of the lodge took place in the old school hall where there were over 50 brethren, members and visitors, witnessing the installation of David Topping into the chair of King Solomon.

Arthur Marshall, the WM, opened the lodge with the school lodge traditions behind him and expedited the business of the lodge without too much ado. His first task was that of welcoming Assistant Provincial Grand Master Barry Jameson into the lodge room. Barry was accompanied by Leyland Group Chairman Chris Blackwell, David Edwards Provincial Senior Grand Warden, Paul Renton Deputy Grand Superintendent of the Royal Arch in West Lancashire and Terry Murtagh Provincial Grand Steward.

Barry thanked Arthur and the lodge for the very warm welcome to Old Huttonian Lodge. He was offered the gavel of the lodge and promptly returned it saying, as the newest of the Assistant Provincial Grand Masters and subsequently having only just taken off the L plates, he had better keep a low profile. At this point Arthur presented Barry with a couple of cheques from the lodge. The cheques were written out to Hutton Grammar School and to Macmillan Nurses and for the sums of £500 and £800 respectively; a grand total of £1,300. Barry was more than pleased to accept the cheques, formally thanking the lodge for their very generous donations.

The next item of business was to install David Topping as WM for the ensuing year and once Martin Swarbrick had presented David to the lodge as master elect, Arthur set about competently installing him. Before long David was sitting proudly in the master’s chair once again having been WM in Longton Lodge No 6237 a few years earlier. The working tools of each degree were presented by Terry Whittingham, David Singleton and Alan Crossley for the third, second and first degree tools respectively.

David then set about appointing his officers for the year before John Howard gave the wardens address. David Johnson presented the masters address with Barry reciting the address to the lodge. Barry then proceeded to convey the congratulations of the Provincial Grand Master Tony Harrison. He thanked Arthur the installing master, saying that he had done a wonderful job.

David closed the lodge in perfect harmony before everyone retired to the school dining room where the festivities continued with a scrumptious ‘school dinner’. Here Barry gave his own personal comments and bid David and his officers have a wonderful year in office. Good camaraderie was had by all and with the brethren having had their fill they departed happy having witnessed a great installation ceremony.

Pictures and article by Andy Sumner.