There were over 40 members and visitors present at Wellington Park Leyland to witness the installation of John Simpkin into the chair of King Solomon. John, of the Leyland Lights, light blue club, is a member of Carnarvon Lodge No 2376 and on the night, the lodge members were more than pleased to welcome Deputy Provincial Grand Master Phil Gunning to proceedings. 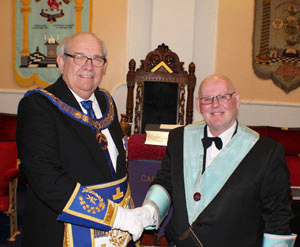 The current and outgoing WM Carl Daggers opened the lodge in due form and executed the business of the lodge with composure and ease. Following a knock at the lodge door, Carl admitted the evening’s guests and Phil Gunning entered the room along with an entourage of grand and Provincial grand officers. John Anderson and John Riley Provincial Grand Stewards lead the procession and they were followed by, amongst others, Assistant Provincial Grand Master Stewart Seddon and Chris Blackwell the Leyland and District Group Chairman.

Carl welcomed everyone to the meeting and offered the lodge gavel to Phil who took it briefly. Phil thanked the lodge for the very warm welcome and stated that he was looking forward to proceedings and promptly handed the gavel back to Carl.

Starting the installation ceremony, Carl invited members to take office as the senior warden, junior warden and inner guard. These were accepted by Alan Moir, David Ball and Terry Derbyshire respectively. Derek Sherlicker presented John Simpkin to the lodge as master elect just prior to Carl thanking everyone for their support during his year in office. He also hoped that they would pledge that same support to the incoming master.

Both Carl and John share the same impairment of dyslexia, which is a common learning difficulty that causes problems with reading, writing and spelling. Reading the ritual can be frightening and to help both Carl and John, Carnarvon Lodge members have helped by sharing the work around the Lodge. John has remarked many times that together with the support of his colleagues of Carnarvon Lodge his confidence and self-esteem have been much improved due to Freemasonry. The courage John gave at his installation was a lesson to all; let every lodge support their members and the rewards will be proven. 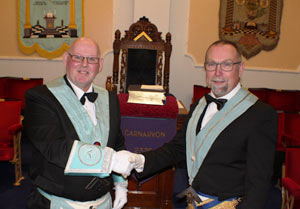 John (left) being congratulated by his installing master, Carl Daggers.

It wasn’t long before Carl had installed John into the master’s chair with aplomb and it was a fitting ceremony as Carl had proposed John into Carnarvon Lodge back in March 2008. The working tools of each degree were presented to John by experienced Masons in Alan Moir and David Ball for the third and second degrees respectively. The first degree tools were excellently presented by another light blue and junior brother, Adam Dennett.

Dave Robinson went on the present the address to the master, Carl presented the wardens address which was followed by the address to the lodge by Phil Gunning. At the completion of the installation ceremony Phil stood and on behalf of the Provincial Grand Master Tony Harrison, he congratulated John for taking the chair of King Solomon wishing him every health for his busy year ahead. He went to Carl and thanked him for the year he had in office and on the manner in which he installed John.

Before Phil could sit down, John’s first official task was a most pleasant one. It was to present Phil with a number of cheques. There was a cheque for £300 to the MCF 2021 Festival; a cheque written out to the Blood Bikes for £300; £250 cheque to the Air Ambulance; another £100 to Jack K Johnson Foundation (Cystic Fibrosis) and a cheque for £150 to the WM’s charity of New Start which deals with heart and lung transplants. Phil thanked the lodge for such an amazing and generous donation to the charities. He said that whilst we may never know the recipients they would certainly be grateful and thanked the lodge on their behalf.

Phil left the lodge room with the other Provincial officers and when john closed the lodge, everyone headed for the dining room. Here Phil gave his own thanks and congratulations to John and to the lodge. He said that everyone had taken part in a good ceremony and the festive board was more than adequate too. He bid John to have a very busy and healthy year in which to carry out the duties of his lodge.