Armistice Day, 11 November also known as Remembrance Day, marks the day World War One ended, at 11am on the 11th day of the 11th month, in 1918 – is always a poignant day in the calendar of everyone’s hearts and it is a day when people from all walks of life unite in thought and prayer. This year was even more moving as it marked 100 years since the end of World War One. 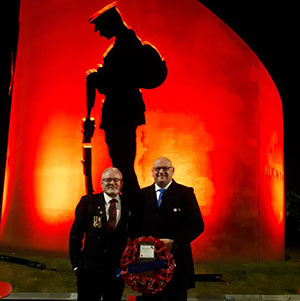 In 2018 Remembrance Day fell on Sunday and as is usual for the group, many of its members were busy laying wreaths at several memorials around the district. Members took part in parades and gatherings at Longton where Martin Swarbrick was on hand to lay a wreath; Euxton memorial was well represented by a number of Euxton Lodge No 7192 members; Eccleston Lodge had a contingent over at Eccleston memorial where Tom Osborne laid a wreath; Bob Olive laying a wreath at Hutton.

There was also a trio of visits by group secretary Dave Bishop and Alan Welburn. They started their day at Penwortham where they were joined by Phil Kavanagh and Paul Boardman. Paul laid a wreath watched by several 100 as the rain lashed down. Dave, Alan, Phil and Mathew McMurray visited Lostock Hall next where Alan, a veteran of the Royal Engineers, lead the brethren to the cenotaph and then formally laid a wreath there on behalf of the group.

In the evening Dave and Alan were joined by Mathew McMurray again and whilst attending an ‘End of Battle’ ceremony which was conducted by the Mayor of South Ribble, Councillor John Rainsbury, at the WW1 memorial at Farington. The memorial was illuminated and provided a stunning backdrop for the service which included a beacon lighting where a flame was lit along with other several locations up and down the country as a sign of unity. At the conclusion of this ceremony Dave laid a wreath on behalf of the group.

There was also of course, a parade hosted in Leyland with the day there starting with the downpour. Thankfully the rain stopped prior to the parade reaching the cenotaph to remember the service men and women who had encountered far worse conditions during their fight for our freedom. Leyland Group Vice Chairman Mike Pinckard was accompanied by a few members from the Leyland Group including Peter Taylor, Provincial Grand Secretary. There were several other members of the group present with their families some along the route of the procession, elsewhere in the parade and also present at the following church service. Whilst at the cenotaph a wreath was laid by Mike on behalf of the Leyland and District Group. Prior to the two-minute silence, Steve Hallam, WM of Leyland Mark Lodge No 1002, laid a wreath on behalf of his lodge and the Mark Province of West Lancashire.

Picture left: Members of the Leyland Group standing at the Leyland Cenotaph having laid a wreath for the fallen. Picture right: Euxton Lodge contingent at the Euxton Memorial.

The group vice chairman and group secretary thank all who went along to pay their respects to those service men and women who have and still are, giving and risking their lives for our freedom and security.

Why do we hold a two-minute silence? The first two-minute silence in Britain was held on 11 November 1919, when King George V asked the public to observe a silence at 11am. This was one year after the end of World War One. He had made the request so that ‘the thoughts of everyone may be concentrated on reverent remembrance of the glorious dead’.