Eccleston visit was a treat for David

Wellington Park Leyland played host to another lodge installation and on this occasion, it was that of Eccleston Lodge No 7754 and they were very pleased to receive Assistant Provincial Grand Master David Grainger into the lodge room. 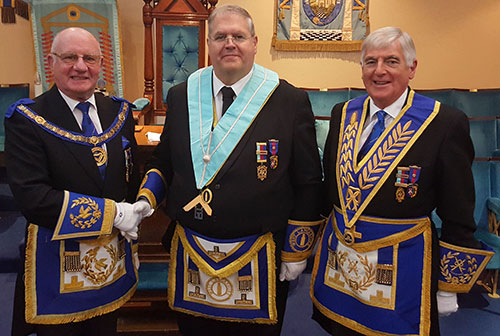 Pictured from left to right, are: David Grainger, Neil Ward and Chris Blackwell.

The WM Neil Ward opened the lodge and executed the business as a time served master of the lodge. He was completing a two-year stint in the chair of King Solomon by installing his successor on the day. David Grainger entered the lodge accompanied by Leyland and District Group Chairman Chris Blackwell and a number of other acting officers. They were headed up in the procession by Provincial Grand Stewards John Anderson and John Riley.

At the completion of the installation ceremony David stood and received two cheques totalling £1,200. The first was written out to the MCF 2021 Festival for £900 and the second was for £300 written out to Genesis Care, a charity providing well-being and respite care. He thanked the lodge on behalf of the recipients of whom he said we may never know.

David then congratulated the new master and said that he hoped he maintained good health throughout the impending year. Before sitting down again he then went over to congratulate Neil the installing master for the manner in which he did so.

He thanked him on behalf of the Provincial Grand Master Tony Harrison for his consecutive years in the chair and also congratulated him on becoming the Provincial Membership Officer. He then turned to the lodge and exclaimed that if the PrGM had been present he would have been excited at the working tools being presented by the very junior brethren. He stated that they were excellently executed and at the same time exclaimed that the lodge appeared to be in good and capable hands which bode well for the future. He pointed out that their confidence and assiduity, given their limited experience, were second to none.

Those working tools were presented by Rick Lockwood, Peter Gibbons and Ryan Mulaney for the third, second and first degrees respectively; each one being a master Mason, a fellow craft and an entered apprentice which is a rare commodity to have in many lodges.

The lodge was closed and the brethren retired to the dining room to continue the celebration where David gave his own personal congratulations to the WM, the lodge and its officers. He commented on the number of junior and light blue brethren in the ranks having been introduced to eight of the 10 junior members. David commented that he was sure that the lodge would be well supported in the years to come. Before finishing off his reply for the toast to his health given by the senior warden, David said that the whole evening from the meeting to the festive board had been a real treat and bid the lodge good health and fortune for the future.