Tony drops in on White Hills

There was another occasion for a Masonic meeting and another lodge installation seen by over 70 members and visitors at Wellington Park, Leyland. This time it was to be White Hills Lodge No 5209 and the installation ceremony of their new WM with the guest of honour being none other than Provincial Grand Master Tony Harrison. 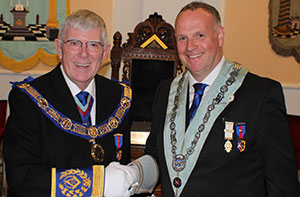 The lodge was opened expertly by John Sidgreaves the WM and he executed the lodge business as an outgoing master with experience. John had been in the chair at White Hills twice before and was very quickly coming to the end of his third tenure in the chair of King Solomon.

The WM gave Tony greetings on behalf of both himself and the lodge, welcoming him to White Hills Lodge installation meeting. He offered the lodge gavel to Tony who took it briefly before returning it and thanking the brethren assembled for the sincere welcome. Turning to John he said: “Good luck and enjoy the proceedings.”

The installation ceremony began with the Provincial Grand Wardens taking up positions as installing wardens. Les Beardsworth was invited to be the inner guard for the purpose of installation, with Les presenting Mark Humphrey to the lodge for installation. It wasn’t too long before Mark was sitting proudly in the master’s chair having been excellently installed by John.

The lodge has a Hall Stone Jewel and it was beautifully presented and explained by Michael Hughes before Mark invested his officers. The Hall Stone Jewel was presented to the lodge following its donation to a memorial to the many brethren who lost their lives during war. This was in response to a suggestion from the Grand Master at the time, HRH The Duke of Connaught and Strathearn at the end of the First World War. The target amount was to become known as the Masonic Million Memorial Fund. 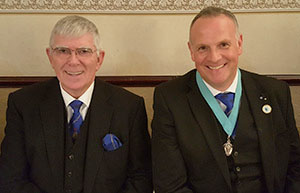 Tony Harrison and Mark Humphrey (right) at the festive board.

Following the end of the installation part of the meeting, Tony jumped to his feet and giving his personal congratulations to Mark shook his hand. He said that he hoped for good health and the strength for Mark to carry out his duties on behalf of the lodge. He hoped too that Mark would enjoy the social aspects of the role with ladies’ evenings and other social events throughout his tenure. Tony then turned to John the installing and past master and said that we had all witnessed the delightful manner in which he installed the WM. He thanked him for his very successful year as master of the lodge. Turning to the brethren of the lodge, Tony bid all new officers a good year and congratulated the junior brethren for their recitals of the working tools.

Mark’s first and most enjoyable task was to present a number of cheques which Tony duly accepted. The cheques were written out to the MCF 2021 Festival for £1,600; £350 for the Blood Bikes; West Lancashire Freemasons’ Charity for £600 and £150 for the RNLI, a total of £2,700. Tony was clearly delighted and thanked the lodge for their great donations on behalf of the eventual recipients. At this point Tony was also more than pleased that the lodge had become a Patron of the MCF 2021 Festival and presented Mark with a certificate accordingly.

The lodge was now under Mark’s control and once the Provincial team had retired from the lodge room he quickly completed the remaining business items and closed the lodge. Everyone present headed for the dining room to continue with the celebration. What a night for Mark Humphrey – being installed in the chair of King Solomon and which was witnessed by the Provincial Grand Master. A night that everyone, mostly Mark, will remember for a long time.