There were a good number of brethren present at Wellington Park, Leyland Masonic Hall to witness a very good ceremony of installation. Both members and visitors had turned out to see Phil Ashton installed as WM of Leyland St Andrew’s Lodge No 7391 for the first time in his Masonic career. 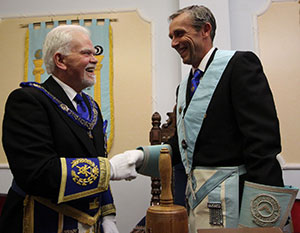 The meeting started well with Chris Hughes the outgoing WM opening the meeting as an experienced master. He executed the lodge business quickly and with aplomb before a knock came to the door. It was Stewart Seddon along with the guest for the meeting David Randerson both of whom are Assistant Provincial Grand Masters. They were both accompanied by various grand and Provincial grand officers, Leyland and District Group Chairman Chris Blackwell and a number of Provincial grand officers.

Chris Hughes admitted the entourage and offered the gavel of the lodge to Stewart who accepted it out of curtesy. He did however return it very quickly stating that whilst this was his lodge he had only come to watch what he knew would be an excellent ceremony of the highest order. No pressure then. At this juncture and upon returning the gavel to Chris, Stewart introduced David Randerson as being the principle guest for the evening. David thanked Stewart and the lodge for his warm welcome and took to his seat in anticipation of Stewarts comments of seeing a good ceremony come to fruition.

On with the show and Phil was presented to the lodge by his dad Walter who had become a member of the lodge when they amalgamated with Coppull Lodge No 4232 in March 2007. It wasn’t too long before Chris had done the deed and Phil was sitting proudly in the master’s chair. He then set about installing and investing his officers for the new season. 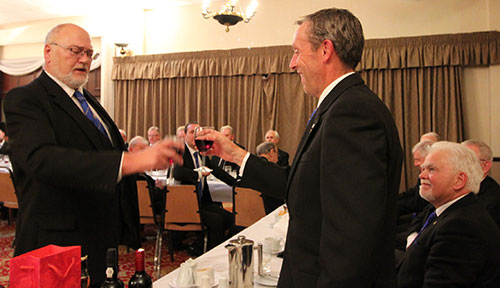 Neil Harvey (left) singing the master’s song to Phil whilst the brethren of Leyland St Andrew’s look on.

At the end of the installation part of the meeting David stood and congratulated Phil on behalf of the Provincial Grand Master Tony Harrison. He said that if Tony had been present he would no doubt have gone to Phil’s installing master Chris and congratulated him on having had a wonderful year in office and to also thank him for handing on the mastership of the lodge in such a heartfelt manner.

Before he regained his seat, Phil presented three cheques to David. One was for the West Lancashire MCF 2021 Festival, a second being presented for Teddies for Loving Care (TLC) and the final one for Jack K Johnson Foundation. Each cheque was written out for £500. David was then quick to point out that the lodge had given sufficient funds to be able to be presented with the status of Vice Patron of the Festival which he duly did.

The lodge was closed in due form with everyone present adjourning to the dining room to continue with the celebration. The festive board was held in very good spirits with David Randerson conveying his own message to Phil. He congratulated him on the honour bestowed on him by the lodge and bid that he would be fit and healthy to carry out his duties as master of the lodge. Neil Harvey gave a great rendition of the master’s song before members and visitors alike headed for home having had a very convivial time.