A first at De Bon Cuer

Yes, a first, not a degree ceremony, but for Assistant Provincial Grand Master David Ogden who travelled to Leyland Masonic Hall as principal guest for the first time since his appointment at Provincial Grand Lodge in May. The occasion was the installation of Dave Coulson into the chair of De Bon Cuer Lodge No 6984. 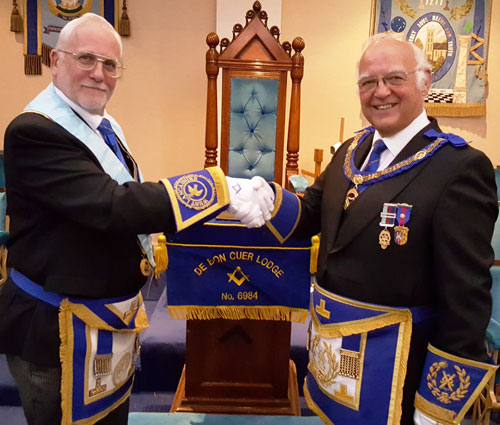 Dave Coulson is an experienced Mason, holding the Provincial rank of PPrSGD, and has served as master on two previous occasions. The installation ceremony was a short one, although ably executed by WM Brian King, assisted by members of the lodge.

An interesting addition to the ceremony, following the appointment and investiture of officers, was a short lecture of appreciation of the working tools displayed in the lodge. De Bon Cuer incorporates St Leonard’s Lodge No 6132, which was consecrated in November 1945. The lodges in and around Leyland during the war years hosted many American airmen based at the airfields nearby, and in a token of thanks and recognition hand crafted a set of working tools from materials taken from damaged aircraft that had been involved in active service over Europe. It is a wonderful piece of history and there is much more to the story, but to fully appreciate it you will need to pay a visit to De Bon Cuer Lodge’s next installation and listen to Bill Briggs deliver his excellent presentation. 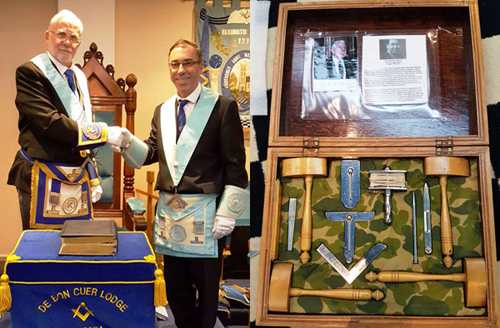 Another little piece of history is where the lodge name came from. It was inscribed on the inside of a gold ring found locally many years ago. The ring also bore the name Langton and contained an impression of a pelican vulnerant, which was the seal of Richard Langton, who in the 15th century was part of the family being Lords of the Manor of Newton and Walton-le-Dale. The inscription, and therefore lodge name, translates from the old French as ‘of good heart’.

A fine festive board followed the meeting, with music and singing by Cedric McIlwaine and Garry Fishwick respectively.