The Ladies Committee of Leyland St Andrews Lodge No 7391 just couldn’t resist taking advantage of the English summer. After all, what a hot one it has been this year. 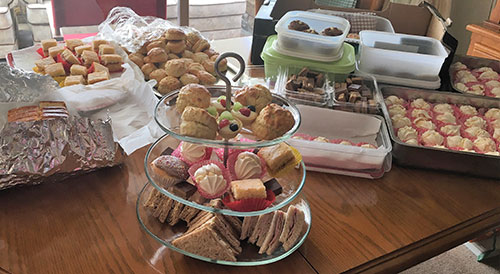 A selection of some of the goodies available at the afternoon tea.

They decided to hold an ‘Afternoon tea in the garden’ event at Mrs Doreen Shires, to raise funds for the Jack K Johnstone Foundation. All the ladies from the committee were involved and each added their own touch to the proceedings. Cakes, scones and muffins were a few of the items which had been baked for the day so that they could be sold to make much needed funds for the charity. Tickets for this event were £7.50 which entitled everyone to a full afternoon tea including unlimited tea and coffee, delicious sandwiches and a wide selection of the sweet treats.

A raffle was held for which there was an abundance of prizes. A pop quiz had been organised, there was also a garden treasure hunt and an opportunity to learn and play croquet. Whilst the weather was unusually kind the ladies were able to spend the whole afternoon in the sun.

The amount raised on the day was an amazing £481.70. This was added to monies raised at the lodge’s ladies’ evening in March which was approximately £295. The members of Leyland St Andrews Lodge then decided to use a small amount from their social fund to make a final total of £1,000.

A formal presentation of the cheque took place by the ladies committee to the trustees of the Jack K Johnstone Foundation including Tina Johnstone, the founder of this foundation. The WM of Leyland St Andrews Lodge Chris Hughes was also in attendance.

The Jack K Johnstone Foundation was launched in February 2017 and deals with sending children who live their lives with chronic illness, disability or sibling bereavement away on short break holidays. For more information about this charity, please go to https://jackkjohnstonefoundation.weebly.com

Tina Johnstone (fourth from left) receiving a cheque from the Ladies Committee watched on by Chris Hughes (back right).