Bob is surprised by invitation to garden party

Invitations to royal parties don’t just drop through your letterbox and when one such invitation did for Robert (Bob) Olive PPrJGW, WM of Red Rose of Lancashire Lodge No 9640, which he joined in 1998, it turned out to be quite a shock. Bob was initiated in Tracery Lodge No 4719 on 7 March 1973. He became a joining member of Leyland Lodge No 4249 in 1994, WM in 2009, ADC for 2 years and chaplain for 3 years and is currently chaplain of Leyland Hesketh Lodge No 986. In Royal Arch, Bob was exalted in Old Worden Chapter No 5366, became first principal 2006 and 2007. He was promoted in April 2013 to PPrGStdB. Bob is also a member of Setantia Chapter of First Principles No 7755 and a founder member of Red Rose of Lancashire Chapter No 1505 in the province of East Lancashire and was first principal in 2014-2015. Bob is also a member of other Masonic Orders. 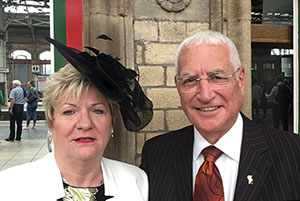 Sharon and Bob about to leave Preston, on route to London.

Thinking nothing of the envelope he had received, Bob opened it at the breakfast table and almost choking on his cereal, he discovered the content comprised a letter from the Lancashire Lieutenancy and from Lord Shuttleworth KG KCVO, Lord Lieutenant of the Duchy of Lancaster. The letter stated that he been asked by the Lord Chamberlain to submit a list of people that he would recommend for an invitation to one of Her Majesty’s garden parties at Buckingham Palace. The letter enquired if Bob would like his name to be put forward in recognition of his ‘personal contribution to the good of the community of Lancashire’.

Bob being a proud Lancastrian was delighted, and honoured, at having his name put forward although he was a little uneasy as to how it came to be put forward initially. He still has no idea who nominated him. Correspondence continued and went back and forth. Dates were given but no confirmation was received as to whether his nomination was successful. When confirmation finally arrived, Bob discovered that he had indeed been invited to attend at Buckingham Palace, with a guest of his choice, in recognition of his contribution. Bob of course nominated his long-term partner, Sharon.

The day arrived and donning respectively a new suit and new dress for the occasion, Bob and Sharon duly travelled to London from Preston by rail. Upon arriving and as they made their way towards Buckingham Palace, they saw many similarly suited couples heading in the same direction. They just had to stop off at a wine bar to steady their nerves. Here they met other couples and in conversation they each asked one another who the nominee was and why they had received their invitation. Bob replied that he was the nominee and that it was for ‘service to the community of Lancashire’, stating that he had no idea how his name came to be put forward. One of the gentlemen pointed to Bob’s jacket lapel and said it may have something to do with that and touched the golden teddy bear badge that he wears – this was a lapel pin for ‘Teddies for Loving Care’ (TLC.)

The other couple had recognised the teddy and voicing their pleasure, regaled to Bob that their very sick child had been in to the local children’s A&E department and had a teddy bear given to him which he takes everywhere, even to bed.  Fortunately, the child is now well but still ‘adores his teddy bear’. It emerged that the gentleman commenting on the badge had been nominated for his work as a hospital administrator; whilst his wife is a nurse in the NHS. 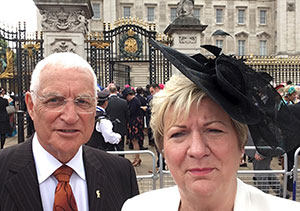 A very proud Bob and Sharon outside the gates of Buckingham Palace.

Following this casual meeting, and Bob being a little wiser, both he and Sharon continued on to the garden party. They were able to find a seat close to the front and enjoyed the proceedings from there. The Queen attend at the garden party but unfortunately Bob and Sharon never got to meet Her Majesty. Bob stated that if they had it would have been the icing on the cake of a very enjoyable day at the Palace. It wasn’t to be so but having had a thoroughly enjoyable day, Bob and Sharon headed home knowing that they had had an experience of a lifetime.

Bob is currently the chairman and one of the founder members of Preston and Chorley TLC and works tirelessly raising much needed funds to purchase the teddy bears. These bears are distributed amongst the children’s A&E wards at both the Royal Preston and Chorley hospitals. The aim is, at the discretion of the medical staff, to present a teddy bear to each child who is in distress and suffering trauma, children who might be separated from their parents or loved ones or in order that they have a ‘friend’ with them.

Bob is a keen supporter of the Royal Life Saving Society (RLSS) serving as treasurer, president and subsequently Chairman of the North West Region where he is also a Life Member and a Life Governor. Bob is also a founder and Life President of Birkdale United Football Club.

All in all, the award and day out was in recognition of a very hard-working representative of the community.