David celebrates his jubilee at Longton

Wellington Park, Leyland Masonic Hall was the scene of another golden jubilee. This time it was for David Walker of Longton Lodge No 6237 who was initiated into Freemasonry back in April of 1968. 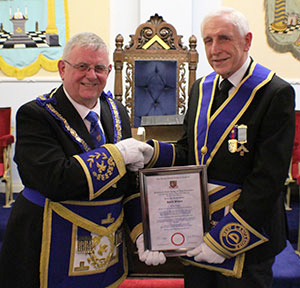 Phil Monks (WM) opened the lodge and dealt with the lodge business efficiently and following a knock at the lodge room door he admitted Stewart Seddon APrGM. Stewart was accompanied by Leyland and District Group Chairman Chris Blackwell and a good number of acting Provincial grand officers. Phil welcomed Stewart to the lodge and offered him the gavel. This being Stewarts right, he accepted the gavel and thanked the brethren for their warm welcome. He went on to state that for this type of ceremony he definitely wanted to keep the gavel and promptly took the chair of the lodge.

Stewart’s first task was to have David placed in front of the pedestal so that he might address him directly and after enquiring whether he was sitting comfortably, he began to present a precis of David Walker’s life. Here he took everyone back to 1939; it was the outbreak of war with Neville Chamberlain, the Prime Minister of a National Coalition.

On 2 January, the highest recorded crowd at a football match in the UK. was recorded when Rangers and Celtic met at Ibrox Park with 118,730 in attendance. Then, to really start the year off with a bang the IRA bombed two London underground stations at Tottenham Court Road and Leicester Square. Preparations for the forthcoming war were rapidly taking place with the Royal Armoured Corps being formed and conscription enacted. The Women’s Royal Naval Service was re-established, the Women’s Land Army was re-formed and the Women’s Auxiliary Air Service created. The submarine HMS Thetis sank during trials in Liverpool Bay with the loss of 99 lives. Sir Malcolm Campbell set the water speed record in Blue Bird on Coniston Water. 1 September saw Operation ‘Pied Piper’ begin – the evacuation of children from London and other major cities. A blackout was imposed across Britain, the army was mobilised and the BBC Home Service began broadcasting with BBC Television shut down until 1946.

Meanwhile there was breaking news at a nursing home in Feniscowles as on 23 March, Mrs Margaret Walker was giving birth to a son – to be named David. There are a number of contemporaries from 1939 which include: From the world of politics – Leon Brittan, Baroness Jay and Michael Meecher; television – Peter Purves, David Frost and John Cleese; authors: Alan Ayckbourn, Margaret Drabble and Peter Mayle and from sport – Alex Murphy, Rachel Heyhoe-Flint and Jackie Stewart.

David’s family lived in Blackburn until he was about two years old. His father Herbert was a market trader and his mother Margaret came from a market gardening family at Much Hoole, which is where the family relocated at that time. David attended Little Hoole County Primary School from 1944 to 1950 and subsequently went on to Hutton Grammar to 1956. He finally went to Liverpool College of Building (now John Moores University) where he studied Quantity Surveying.

Being sports mad, David played rugby at both school and college, playing football and cricket there too. He was, and still is, a passionate Preston North End fan. David was a member of Preston Harriers and took up long distance running. He was a good tennis player winning the Southport Men’s singles and doubles championships.

David left college in 1960 and the mother of a friend set him up on a blind date, he was smitten and as a result married Miss Pat Smith at All Saints, New Longton on 28 February 1961. Four daughters arrived within the space of six years, Susan, Carole, Sandra and Diane and there are also four grandchildren; Lizzie, Douglas, George and Annabelle.

In David’s working life, after leaving college his first job was with T N Alexander & Sons, a firm of architects and surveyors in Liverpool where he was to stay for two years before moving nearer home and commencing employment with Jones & Etchells, Chartered Surveyors – now Frank Whittle & Co. Here he stayed for a further seven years. At the age of 29, David set up in business with Frank Thornber forming the company Thornber & Walker, which is still in business today and from then on, he has been self-employed for the rest of his working life.

Working on projects all over the UK, David was one of the early Project Managers for the Royal Institute of Chartered Surveyors into which organisation he was admitted an Associate in 1964 and a Fellow in 1973. In 1971 he became a Member of the Chartered Institute of Arbiters and he is also a Fellow of the Institute of Quantity Surveyors, being admitted in 1974.

On detailing his Masonic story, David was proposed into Jubilee Lodge No 5555 by his uncle because it was far more convenient workwise for him to attend meetings at Preston. He was initiated in to Freemasonry on 3 April 1968 and was an active member for some eight years until work commitments all over the UK made attendance a struggle. However, on 18 December 1985 David became a member of Longton Lodge. 1994 saw him appointed as representative for the 1997 Festival in aid of the Masonic Trust for Girls and Boys and at the same time appointed as lodge auditor. David became master in January 2002 and following his year as IPM he was elected treasurer of the lodge – an office which he holds today.

David joined the Old Huttonian Lodge No 7614 in March 2004 and in which he became group representative and almoner. David became a group auditor and since July of last year a director of Leyland Masonic Properties Ltd. His first Provincial appointment came in 2010 when appointed Past Provincial Junior Grand Deacon being further honoured in 2016 when he was promoted to the very high rank of Past Provincial Grand Superintendent of Works.

Stewart went on to ask Chris Blackwell Chairman of the Leyland and District Masonic Group of Lodges and Chapters to read a certificate to David. This he did before Stewart then presented it to him. The certificate is an acknowledgement of the Province of West Lancashire’s great appreciation of half a century of membership of the Craft.

The ceremony being complete, Phil retook the master’s chair and formally closed the lodge in due form. At this everyone retired to the dining room ready to continue the celebration at a festive banquet. At this banquet Chris Blackwell was afforded the opportunity to propose a toast to Stewart Seddon APrGM. Stewart arose and responded accordingly and in doing so presented David Walker with the ‘Book of his Life’.

Paul Renton then stood and proposed a toast to David Walker. Paul said the celebrant was held in high esteem by his colleagues and offered his congratulations. It was David’s turn to respond and as he stood he did so by giving thanks to his the Longton Lodge brethren and all the visitors for being present at his 50th celebration. David was humble in his response and after regaling a few stories and quips, he offered advice to the younger brethren to stay focused and enjoy their Freemasonry. He revealed how lucky he had been in life with the good support of his wife and family without which he could not have enjoyed his hobby. David wound up his response by thanking Stewart Seddon and the acting officers for their presence in supporting the very memorable evening. He received a standing ovation.