Jason honoured by the Province

Eccleston Lodge No 7754 held their regular monthly meeting over in Leyland which was attended by 60 members and visitors. It was a large gathering and you would have been excused if you had thought that it was an installation ceremony. It turned out to be a very special meeting though and with a secret twist to honour a prominent member of the lodge. The biggest twist of all was that not one member or visitor expected the night to turn out the way it did save a couple who had kept proceedings ‘under wraps’. 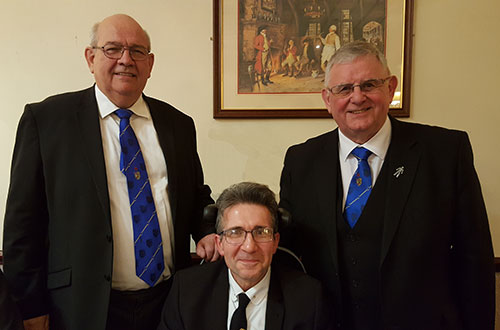 Pictured from left to right, are: Phil Gunning, Jason Astley and Stewart Seddon.

The main item of business for the evening was to be an initiation which the members had practiced over the proceeding weeks. The lodge also knew about the presence of Stewart Seddon APrGM who was to attend the meeting as a visitor and not in his Provincial role. He was therefore present at the opening of the lodge and was sitting comfortably having a ‘night off’ to enjoy his Freemasonry. In fact, Stewart had attended the lodge meeting in order to thank Andy Sumner for his time and commitment to the Craft in his year of acting office and for supporting him across the Province. This was communicated at the end of the meeting.

The initiation was the lodge’s fourth in three months and so the lodge’s reputation seemed to be growing, enticing visitors from both in and out of the Leyland Group. Just as the ceremony was about to get underway, there came a knock at the door. Upon enquiring as to whom it was, Rick Lockwood as inner guard returned and informed WM Neil Ward that Deputy Provincial Grand Master Phil Gunning and Provincial Grand Secretary Peter Taylor were outside the door of the lodge and demanding admission. Neil thought it best to let them in and he warmly welcomed them into the lodge room exclaiming that it was a pleasant surprise to see them at the meeting. Subsequently, Neil offered Phil the gavel of the lodge which he took, as was his right, and he immediately passed it back saying that he was there to enjoy the evening’s proceedings.

The ceremony of initiation proceeded, and it was Andy Sumner, who as acting junior deacon, perambulated the candidate around the lodge room and followed it by a rendition of the ‘Charge after Initiation’ which was well received by the onlookers. After the ceremony, Neil continued with the lodge business and just as he was starting to close the lodge, a real surprise was unravelled.

Phil Gunning stood and said a few words – he had earlier congratulated Peter Gibbons for his excellent presentation of the working tools of the first degree – and in doing so he introduced Peter Taylor to read a notice. At the reading of the notice everyone in the lodge room gasped with excitement as Jason Astley was promptly promoted to his first rank as PPrGSuptWks. This particular rank is one of the highest that the Province can confer on any of its members. For Jason, who is the secretary of the lodge, this was a well-deserved honour as he is a hardworking and popular member of the lodge and indeed the group.

These particular and special ‘in the field’ promotions are uncommon and when they are presented it is due to a significant reason where a brother goes over and above the call of his duty. This is evident with Jason’s situation as he has had multiple sclerosis for a number of years. He has continued to work for and supported the lodge to the best of his abilities. Jason joined Freemasonry in early 2007 becoming WM in October 2012. The role of secretary became vacant in October 2013 and Jason volunteered at the opportunity to give something back to the lodge as well as being the lodge’s IPM. During Jason’s occupation of the master’s chair the members of the lodge were completely supportive and even went as far as repositioning many parts of the lodge room so that he could get around in his motorised chair. Jason said of his colleagues: “They are all a credit to Freemasonry because of this.” Jason commented that he enjoyed the office of junior warden as it allowed him to toast the visiting and musical brethren. It also afforded him the opportunity of addressing the ladies at the lodge’s Ladies Evening. He was the lodge ‘Beagle’ on many occasions and looked resplendent in his red overcoat. Jason has been a member of the Chorley and District MS Society for a number of years and if anyone would like more information please go to the following website https://www.mssociety.org.uk/

The meeting closed and over 50 of the meeting’s visitors joined together in the dining room for a festive board which was thoroughly enjoyed by all. Everyone retired for home following toasts to the health of the candidate and of course, Jason. The meeting will be remembered for the surprise visit of the Deputy Provincial Grand Master and more importantly the reason for his visit.