Another Saturday afternoon installation meeting for Leyland Hesketh Lodge No 986 at Wellington Park, Leyland, saw Ian Smith take the chair of King Solomon for the fourth time in his Masonic career. This was also a bit of an odd situation to be in. Ordinarily a master of one lodge can’t be the master of another at the same time and special permission had to be sought with dispensation being given by United Grand Lodge of England. Ian was also the master of Phoenix Lodge of Installed Masters No 9206 and is due to end this term in the chair two months after being installed in Leyland Hesketh Lodge. 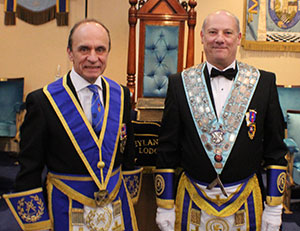 The meeting was opened by the WM Ian Heyes and once the lodge business had been transacted, Ian accepted the request to admit the representative for the day, the Provincial Grand Secretary Peter Taylor PAGDC. He was accompanied by Chris Blackwell the Leyland Group Chairman and a few acting Provincial grand officers, namely Eric Hart, Ian Smith and Andy Sumner. Peter thanked the lodge for the very warm welcome to the meeting and said that he was very much looking forward to a good installation and as he had known Ian Heyes for a number of years, he was sure that there was no pressure on him to perform to a high standard! This comment as you might imagine brought a chuckle from members and visitors alike.

For a weekend meeting, there were a good number of members in the lodge room, some travelling down from Scotland for the occasion. Ian Smith was presented to the lodge as master elect by Gordon Maclellan, this being another proud moment for Gordon as he was Ian’s proposer when he introduced him to Freemasonry. Ian took the obligation of a master elect and very quickly that of an installed master and therefore it wasn’t long before Ian Smith was sitting comfortably in the master’s chair.

This completed the installation proceedings with Peter jumping to his feet to congratulate Ian on behalf of the Provincial Grand Master Tony Harrison. He also thanked ‘his old pal’ Ian Heyes for the manner in which he had installed Ian Smith to the chair and for having taken on the master’s role himself the previous year.

Before Peter could sit down, Ian presented him with a number of cheques for eventual delivery to the following recipients. The total giving was £1,250 and it was made up of four cheques each of which was written out to, the MCF 2021 Festival for £500; Meningitis Now for £250; Teddies for Loving Care TLC for £250 and St Catherine’s Hospice for a further £250.

Peter left the lodge room with the acting Provincial; grand officers before the lodge business was completed and before closing it down. All members and visitors retired to the dining room for a splendid festive board and camaraderie. It was here that Peter gave his own personal best wishes in his response to the toast to his health. He said that he hoped that Ian has a very happy year in office as the lodge master, enjoying visiting other lodges along with the social aspects of the role. At the end of the evening everyone left for home knowing that they had witnessed a most enjoyable meeting.